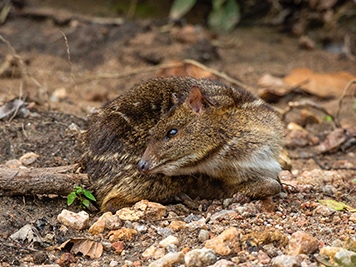 We see Cheetals and Sambars and other common animals in the jungle most of the times, but many times we visit the forest in the hope to see something different or some rare animal. India is blessed with the diversity of animals, there’s lot to observe and study. But with diversity in number, there is diversity in behaviour and way of living, which makes it very difficult to see some animals.

No, it’s not any cat species or the rare Red Panda, belonging to the different Scientific Family Tragulidae, the Indian Chevrotain (Moschiola indica) takes all the credits to be India’s smallest deer and is also known as Mouse deer. In Sinhala language Meeminna (earlier species classification) roughly translates to mouse like deer. And this smallest deer of India has its presence in parts of Africa and South east Asian countries as well with different species.

Not only smallest but it’s also unique and different compared to other deer families of India. Unlike deer of Cervidae family, it lacks antlers probably to avoid getting stuck in dense undergrowth canopy. But adult males of mouse deer has overcome this with having canines protruding below their lip line which they possible use while fighting with other males. And what makes them most unique is presence of only 3 chambers in stomach instead of having four chambers. Looking at their size, that’s better for them.

But being small in size, they do fall prey to several predators. Also facing survival threat from Snare traps and loss of habitat on a large scale.

Next time when you visit a jungle, try looking  for them in tree hollows at the base or dense bushy areas, stream beds and also near bodies of water during summers. High chances you may overlook this cute looking unique deer.