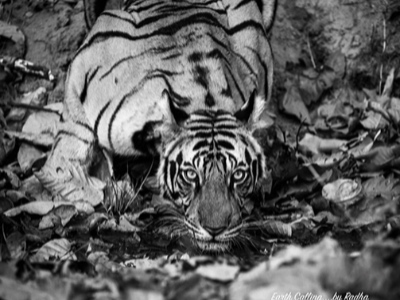 When I sometimes wonder how I started to like wildlife and how I entered this field, I go back into my childhood days, where the forest was very close to my house and my farm. My parents used to go everyday to the fields and to the jungles and I sometimes used to go along with them. During those visits into the jungles as a young boy, whenever I used to see spotted Deers and Sambhar Deers, local people used to mention that there was good Tiger activity in this area today and the Tiger killed some cattle in that area and even in our village there were numerous instances of Tigers killing cattle and dogs. I had only heard about all these encounters but never had seen it in person. My house had a boundary fence made of thorny bushes and bamboo, and I used to fear at night whenever the dogs used to bark, cows used to make noise or the Deers used to give alarm calls as we all knew that a Tiger is on the prowl somewhere nearby. I always used to pray to the forest gods to one day to show me the mighty Tiger. One night, when I was a very young kid I had to answer a nature’s call in the middle of the night. As a kid I was scared to go out and tried waking up my mother, but she was deep asleep and I had no choice but to go alone. There were no proper toilets during those days and I had to walk alone a few feet in darkness to reach a secluded place to relieve myself. It was a full moon night and I was walking with little visibility provided by the moon light I saw something moving in the bushes nearby and both of us came to a standstill together and looked into each other’s eyes. There was this Tiger looking starting into my eyes and snarling at me. As a kid I thought it was smiling looking at me. Without a thought, I ran into my house and forcibly woke up my mother and told her that I need to show her something really magical which is standing outside. As we both opened the door and were about to step out we see a Big Male Tiger right near our fence looking at both of us. My mother pushed me inside the house and locked the door and went back to sleep as if it was normal. But not before giving me a tight slap on my face for going out alone. But I was not bothered about the slap or the numerous calls of dogs and Deers outside, I was just thanking the Forest gods for answering my prayers and delivering the Tiger right outside my house. That was my first tiger sighting !!