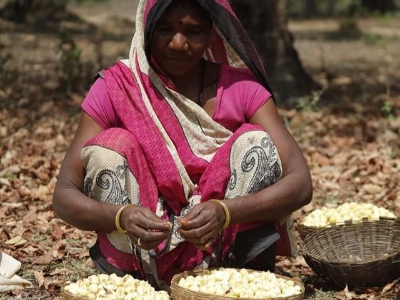 Mahua flowering time is over now and the fruiting time has began and as we know Oil is made from these mahua fruits.  While I was a young boy, we had many mahua trees and we used to call these trees with various names like - the Gram of a tree, watery tree etc.  It was called Gram of a tree because the flower was very small and it used to take a long time to pick it from the ground like picking a tiny gram.
Similarly, the name of the tree was watery because the flowers used to contain high amounts of water and it’s because of this weight of water that the flowers used to fall from the tree to the ground. Also this tree was known in the local language as “Mudcdi” which means headache, because whenever we used to eat these flowers we used to develop a headache.
There are a lot of trees that are named similarly based on its various characteristics and this makes it easy to identify in different  ways to the people.  We all know that Bandhavgarh is the stronghold of Tigers, but when the Mahua flowering season begins, we wake up as early as 3 in the morning to collect these flowers for the numerous uses it has. We locals very well know the risks associated with this as we have encountered the Tigers and Sloth Bears during this time. However, there is a local saying that, “it’s better to get killed by these wild animals than starving to death” as these flowers used to be one of the main source of livelihoods for us locals.
These days, due to wildlife tourism many tourists have started coming and because of which the lifestyle of the villagers have improved. However there are still many villages where the people still follow this risky practice, the condition of my house was like this until a few years ago. Now is the Tendu season where the new leaves of tendu have started to grow, local communities pluck these leaves and make bundles to sell them to the Beedi manufacturing agencies as a means of livelihood.  These jungles and it’s trees are not only allowing the wildlife to flourish but also they are helping the local communities to survive as well.